** Project was also presented within the Playground Program, with one happening in Josephwiese, Zürich.

​Why stopping decadence if preserving also causes satisfaction? How does a world in constant search for progress and change, affects positively and negatively our present? Decadence in a cultural sense understood as the inability or impossibility of promoting changes is the starting point for the establishment of the series of community interactions and the production of knowledge and representations. Through conversations and active participation of a community in a workshop, «Stop Decadence!» incorporates opinions about visions of the future for modern human settlements into an artistic research process.

The last event for «Stop Decadence!» was focused on the bringing of ideas to Toni-Areal, to the art producers and back to the neighborhood through drawings. On April 14 the leading question was: How does the new Toni-Areal impact the city of Zurich? 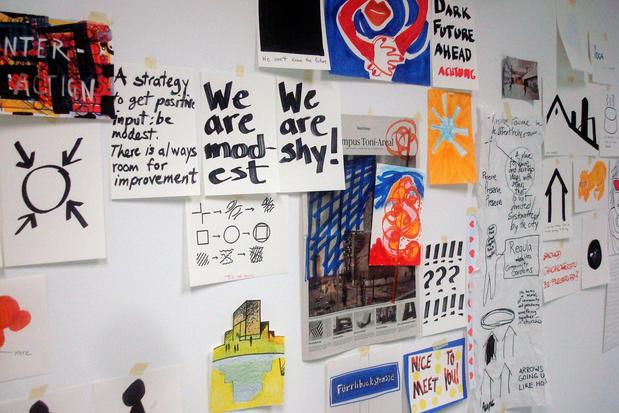 Jan 2015
** This project was done in the context of the program DOING & REFLECTING: art strategies, cultural practices & public spheres, organized by Dominique Lämmli, professor of ZhDK, the School of Arts in Zurich. ​​ Within three days, a series of interviews were performed to people living in or connected to the neighborhood where Toni Areal and the School of the Arts is. The questions focus on memory and visions of the future of the neighborhood, also seeking an opinion on how the interviewers, as members of a community, think that Toni Areal and the School of Arts Zurich will impact their relational dynamics. I also asked for a quick sketch representative of our talk, and invited them to be part of the production of a series of posters during the program.
People were invited to draw in a workshop were we talked about modern human settlements, development, and the Swiss sense of decadence and progress. Using the interviews made previously, we worked on text and images as representations of these ideas. Finally, the drawings were posted outside in the neighborhood, among businesses, residential and social areas.
*The strategy of interviewing (acquiring knowledge) and posting posters in public spaces (rendering this knowledge into an artistic expression and leaving it in public display) is based in the work I initiated with Yana Drumeva (Bul/Ita) during a residency in Bulgaria. What we do is incorporate opinions about visions of the future for modern human settlements into an artistic research process, through conversations and active participation of a community in a workshop. We end up posting the ideas we obtain from the participating community through posters/collages, including phrases that express a wish or blessing of well being.
See more here.
View on Mobile