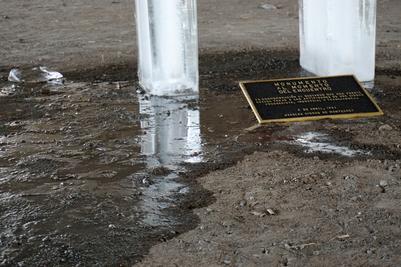 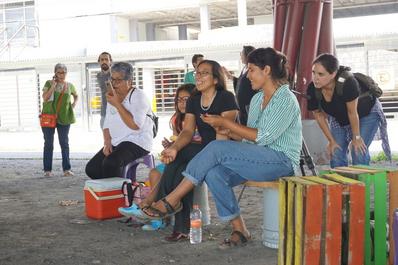 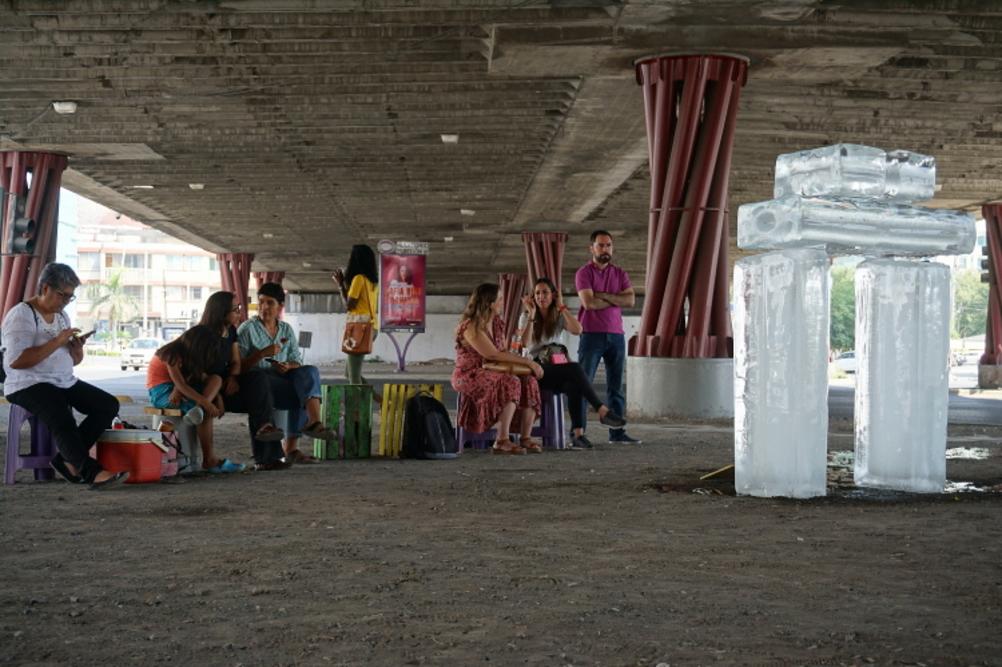 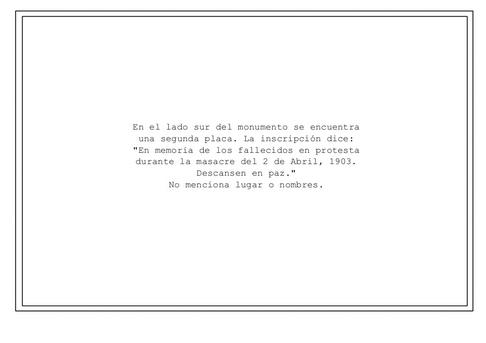 Photographs by Sandra Leal, Calixto Ramírez, and Ana Cadena, who were constant moral supporters of this endeavor.

A monument that interlaces an extraordinary snowfall,  a protest and the act of rest in a fictional crossroads of History

The Monumento al Momento del Encuentro (spanish title) had its first installment as an event where an ice sculpture, a bronze plaque, a conversation and a social gathering were placed in the crossroads of the streets Garza Sada and 2 de Abril, in the city of Monterrey, Mexico.

The public "monument" engages with the fictional and real history of the city. It commemorates a weather impossibility, a fictional snowfall that happened on April 2nd 1967, and creates connections to other historical events: a battle, a protest, and a forced stop to the post-industrial activities of Monterrey.
Domestic footage and old narrations of a real snowfall in 1967, found in the archives of local hobby historians and chroniclers, show how snow, a completely regular and mostly uninteresting event for many, is inversely transcendental in Monterrey. The anecdotes state that the city dynamics were greatly affected. Labor, school and traffic, stopped as an amazed population addressed this event as 'magical' and something 'exceptional' that happens only every 100 years. (2)

The 2 de Abril street , where the "monument" was placed, is named after the date of a historical battle when Mexican batallions won against French occupational forces in 1867. The 2nd of April is also the date in which 1500 people marched on the streets of Monterrey against the oppression of a fascist oligarchical government and against labor mistreats, in 1903. That day, unofficial chronicles state that 50 protesters were brutally shot by the police.
I question: is it not funny... like funny weird and funny haha... that 100 years after that battle, a heavy snowfall would bring a break to the activities of a progressive industrial and hard-working city? Which of those rarities do we need in order to take a rest: that of a snowfall or that of crowds raising their voices for justice? What is a rest if not a weapon? What is a snow fight that happens every 100 years?

The location where the "monument" was placed brings yet another interesting fact: the building of XEW Multimedios Monterrey, the most important media agency of the northeast of Mexico, is located in that same street, a couple of blocks away. Plus, now the 2 de Abril street is been renamed as Jesus Dionisio González, the founder of Multimedios. The "monument" has been meaningfully situated right on the presence of this story and this media agency, which has acted for years as a producer of day to day local History.

I was looking then into some mediums of History, in order to give sense to the "monument". These are easily found by traveling around.  For example: the names of streets and parks in this metropoli are triggers of memory. A public sculpture´s function is to commemorate an event or a person that has been officially accepted as historical heritage, gloriously worded on a metal plaque inscription. Flags, maps and photographs are easily accessed in museums. Other 'softer' mediums are the anecdotes of chroniclers and hobbyists in social media, who share life recollections.

Since the beginning of my research, the narratives seemed to connect and interlace not only in a physical crossroads, in the memoir of the city, but in the languages that these memories take and that are officially inscribed in the public sphere. That, and also in the realization that fiction too plays a role in how memory and history are created, recollected, preserved and/or reproduced.

With this in mind, I went around the city looking for, and also asking to knowledgeable people, if there where any historical sites written or starred by women. I found a bust and a few couple of plaques in schools with the names of female teachers. I learned too that there haven´t been official state appointed female chroniclers ever. The hobby historian blogs and TV programs that I mentioned are run by a group of men talking to each other. The bronze statues one recognizes as placement referents, are all made by male artists. The metal workers that made my plaque were all men.

Is History a gendered space? Who has the power to create and preserve collective memory? Who decides the public forms? Is reproduction of History an instrument of patriarchal powers, not just fascist, not just class-ist or racist?

The ice "monument", thus, addressed not only the snowfall story, but other narratives that appeared while researching. Around the sculpture, a sort of social space was created, as in the manner of some public sculptures. Apart from the invited spectators and passersby, four women were specifically asked to be present and have a conversation around the fictional and real histories that the "monument" commemorates so to raise questions about the gendered male space that the production of History is. These are activist leaders Esther Rodriguez and Erika Charles, journalist and feminist Guadalupe Cruz, and the Chief of the Institute of State Patrimony Rosana Covarrubias. They related to the sculpture from their very own perspectives. I thank them deeply.

• Nov 2020 - Text "What is a rest if not a weapon?" published in the set of booklets "Paisaje, Ciudad y Delito", the product of a series of lectures about violence, city and landscape giving voice to positions coming from the arts, sociology and activism.  Organized by Ana Cadena and Futuro Moncada. Publication design by Futuro Moncada

• Mar 2020 - video "What is a rest if not a weapon?" part of the online exhibition "Relatos de la Cuarentena" curated by Virginie Kastel 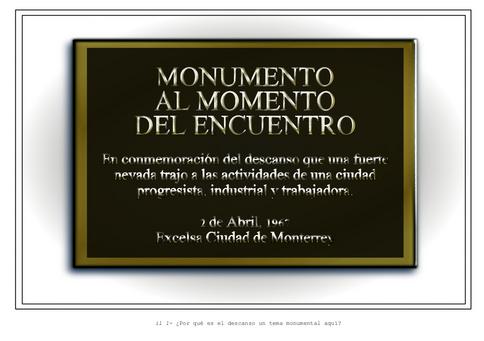 ​The Monument to the Moment of Exchange commemorates an event which narratives originated in different contexts and exist in different forms, clashing in a specific space and time proposed by the artist. Historical and supernatural instances, dreams and scientific research, cultural discrepancies, the varied ecologies in and out of this world, etc., are put together through different artistic formats and by using social artistic practices such as public sculptures, interviews, conversations and collaborations.

The issue of purposely making narratives coming from different sets of origins encounter, prompts a set of problematics in which the artist must deal with the happening of what the exchange, collision, juxtaposition, interlacing or pairing of them can create. What happens before, during and in the moment after, is always influenced by the artistic strategies and objects generated throughout the time it lasts.

The Moment of Exchange Memorial is really a strategy of work that deals with memory, the language of history, and the media politics that influence the common consciousness of societies. The purpose is to affect the stories that already have a preconceived place in our imaginaries, meaning that they have a previous relation with History and are a referent, by altering the opinion that the public might have of them in order to affect opinions towards further similar narratives.

As the collective Orphan Drift wrote, "the action that leads to melt borders of the natural, unnatural and the supernatural, can only happen in the uncanny [as a space], in the fundamental chaos of nature [as an event] or in an object [as a mesh or as a network of roots or veins that find a way across layers of thick cement.]" (1) I follow their proposal of finding a breach in the narratives by use of the magical, un-human, and strange. This project is based in the idea that the Moment of Exchange happens when people expect the unexpected, the uncanny, and a transformation. We do not fight change in this moment, as done in other moments of a process, because we already expect to perceive something that was unknown by us before. 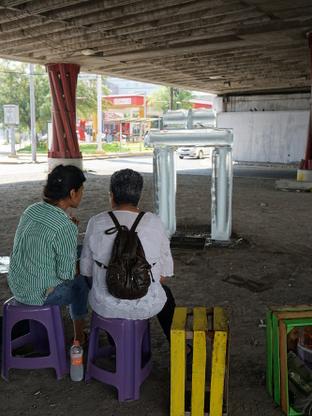 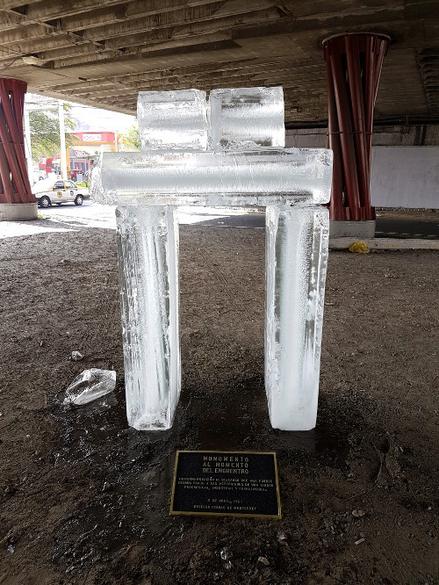