A five day workshop took place in a public primary school with children from second to sixth grade old.

We started by discussing about the future of their community, and their opinions on the present. We made a mind map and then a layout where they could see all the ideas that came up from this first session. Later on we brainstormed, decided which ideas to use in the next days, and made posters that illustrated them. In the end the children posted their works out in the garden of their school.

It was taught and organized with the help of Juan Gonzalez and the teachers of Escuela Primaria Independencia.

With artist Javier Dragustinovis I developed banners for his neighborhood. We started by interviewing people from the vicinity, asking them about their opinions on where they want to be and why? Where would they want to raise their children, what is their opinion of Matamoros and immigration, and why do they think that way? He lives in the central neighborhood of the city, next to the municipality building, the church, and the public plaza. But we found that most of the people we interviewed were not even from there, they were immigrants from southern states of Mexico and even Central America.

We decided to use their own words obtained from our conversations and applied a different layer of meaning by turning them into compositional elements. The words were seen as drawings in istelf, and were mixed with material that we got from that same community (the textile shop). Finally, we posted them outside in the street, with the help of his very nice neighbors.

II. With Juan Gonzalez, we decided we would use found objects from the streets (basically trash) and intervene them with the ideas we got from the children's workshop called "The Future" (info following). Afterwards, we places the objects outside again, as in an exhibition display done on a wall on a no-name street.

I am still reflecting on leaving artistic objects in the public space just like that. Why and how am I addressing the public? How will the objects be understood if there is no institutional legitimation? What is public space? , etc. Either or, we had many people stopping while we were putting up the things, even a lovely lady with her child, telling us that it was great that we were supporting cultural life, and that she liked to see artists in action. 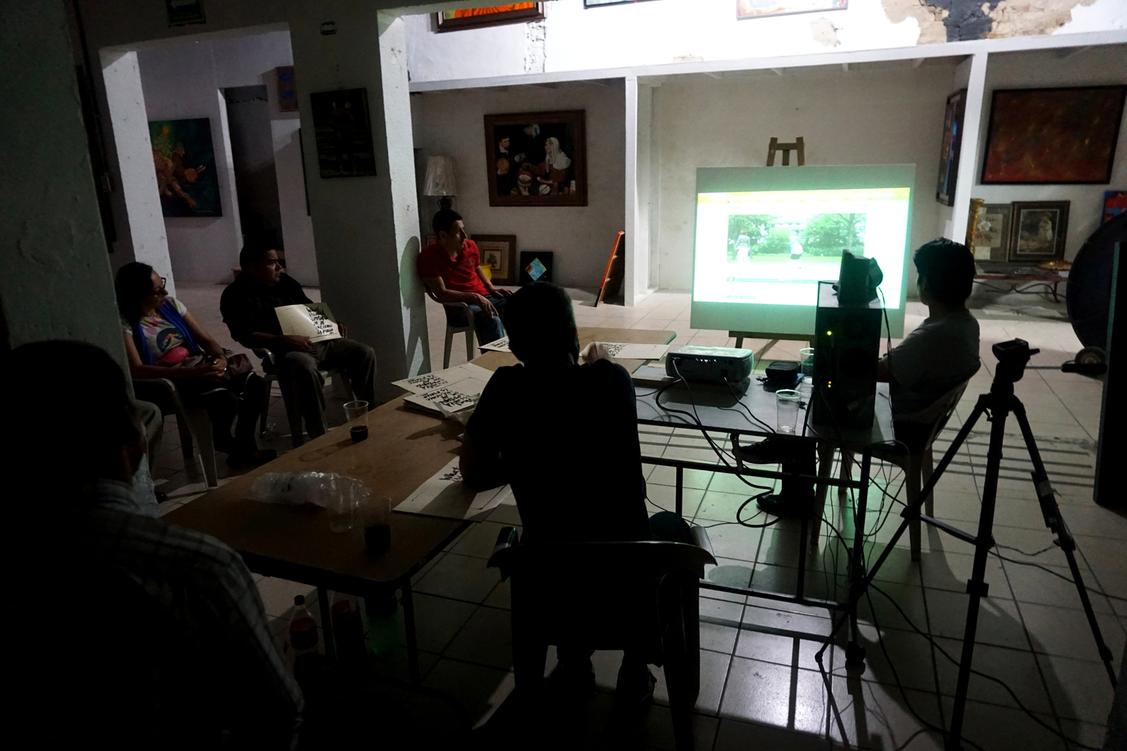 I spent a month in Matamoros Tamaulipas, a Mexican city that borders with Texas, to experience and research on how contact and community are built in such conditions.

Not the nicest cities of Mexico, I should say. It is very dirty, disorganized, full of potholes, flooded and gray from dust and pollution. It is also historically dangerous. Bombs and shootings are not uncommon and even more normal nowadays, since the past ten years. But its inhabitants make their way through the city. Ignore the bullet caskets found on the sidewalks (apparently a common finding, I saw it myself) and go to work, shop, go to school every day, or build close-gated communities, because this is how it is there and this is how people adapt to difficulties.

Other than how violence and corruption shape the daily experiences of people with their environment, I am also interested in its immigration history, how people had for years the desire and tendency to move to the north, and how this immigration has affected the city. How people that live in the Texan side of the border relate to the Mexican side and vice versa. Also how people connect to the city, how they describe themselves as part of it, what sort of things would they keep or change. Their relation to the "maquiladoras" or factories that produce parts of different sorts, and that employ people for minimum wage to produce mass high-tech elements for international companies. Their life always in apparent transition from rural to urban areas.

This is the city were I was born in and were my family still lives, but this is not the most important reason why I want to work with artists and people from Matamoros. I believe human settlements placed in political borders can tell us a lot about how countries deal with human rights and how people confront what could be described as a hard life situation. I also believe that it is inevitable that artists respond to their immediate environment, and that the artist's condition is full of privileges to communicate, to connect to people and places, to create networks that could improve the community, and to empower.

I feel privileged and i respond, indeed.

Projects realized on May 2015 in Matamoros, Tamaulipas. Sponsored by a grant from Edith Maryon Stiftung. THANK YOU!

A discussion with local artists was organized in  "Marcos y Molduras" , a local off-space that is half a framing store, half a gallery. From the impression they gave me, most of the local artists know each other and it is common that they help each other as well.

Someone from them found this space, they all helped to fix it, and now they share the rent.

Our discussion there was partly a presentation of their works, but also a discussion about how they move in the city, find spaces to exhibit or paint murals, and how does the politics of their community affects them.